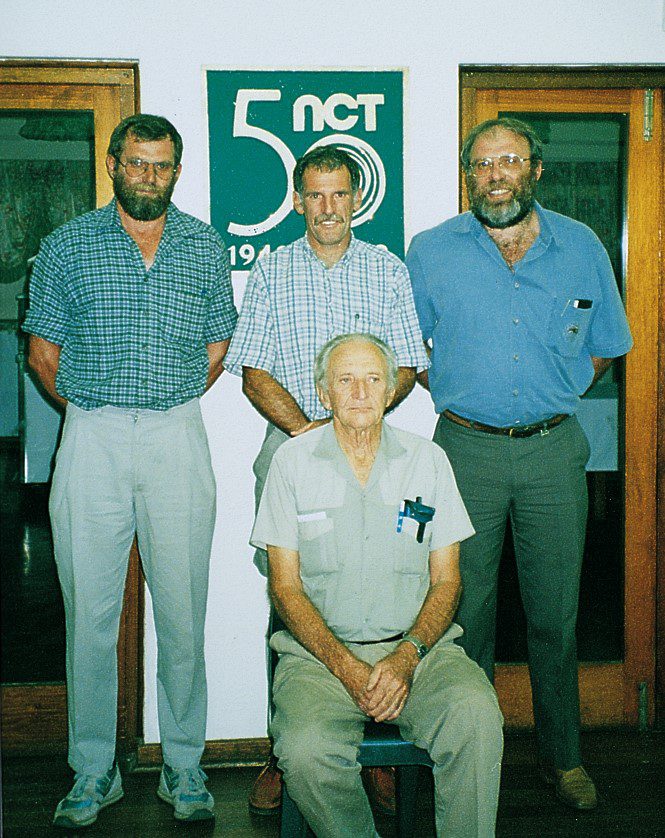 Above: Fred (seated), with three of his sons, from left to right, back row: Randolf, Friedel and Volly, who have continued to farm and maintain the family relationship with Safire and Brokoop.

Friedrich Johannes Ludwig Keyser, known to most as Fred, passed away at the age of 97 on 28 January 2017.

He was born on 19 August,1919 at a Mission station in rural KwaZulu-Natal and grew up in the Paulpietersburg district, attending the Luneburg and Braunschweig schools.

Fred was a great family man, a dedicated farmer with a passion for trees, and a founder member of SATGA, Brokoop and Safire. His support of these organisations continues today, with his sons carrying on in his footsteps, placing their insurance with both Brokoop and Safire.

His first experience of the timber industry was as a partner in a contracting business, felling timber for farmers in what was then Natal. After marrying his beloved Selma on 4 July 1952, he acquired his first farm at Eston in the Richmond district in 1954. Fred met Selma when she was studying for her BA degree at Pietermaritzburg University, an incredible achievement for a lady in the 1950s. Fred had a favorite story in which he claimed that despite having finished school at a young age and not being a major academic, he still attended university – for the sole purpose of visiting the love of his life!

Fred and Selma had four sons, Friedel, Volley, Randolf and Waldemar, who are all married. Fred had a great relationship with his daughters-in-law and they in turn admired and loved their father-in-law.

Fred was respected for his excellence in farming, his honest and practical advice, and his caring attitude towards those that he interacted with throughout his life. His passion and skill for woodwork will be remembered by his family for generations to come as he carefully and lovingly crafted items of furniture for each of his children, which are proudly displayed in their homes. His avid interest in carpentry lives on through two of his grandsons, Glen and Stephen, with Glen making it his lifetime career.

We at Safire wish the family strength whilst they continue without the gentle guiding hand of a dear husband, father, father-in-law, grandfather and great grandfather.