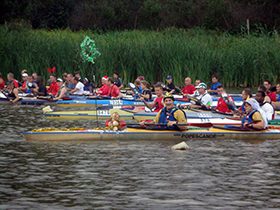 There was a festive vibe in the air as reigning Dusi K2 champion Sbonelo Khwela claimed the men’s honours and Abby Adie the women’s honours in the Safire-Clanfin Nite Race at Natal Canoe Club in Pietermaritzburg on 11 December.

Numerous boats and paddlers were decked out in Christmas garb as the event lived up to its family billing. “It’s great to see so many social paddlers at this event as well as the youngsters and the guppies who participated. It was an impressive turnout and Safire will definitely participate in this event again next year,” said Safire Insurance Marketing Manager Anton Rohrs, who was one of the participants in a well-supported event.

While the Christmas spirit reigned, up front of the race a tremendous battle took place between Khwela, Thulani Mbanjwa, Banesti Nkhoesa and Murray Starr, with Khwela demonstrating superb form at the take-outs and put-ins and on the sprint to the finishing line.

He had flown in from Cape Town earlier in the day and rushed down to Inanda Dam to fetch a boat before heading for Camps Drift. The rushing about didn’t affect his performance, however. “I’m feeling good,” he said afterwards. “I’m feeling confident, especially with my paddling. My paddling is up there. My aim has been to up my game on paddling because guys like Andy [Birkett] did the World Marathon Championships, so his paddling is strong. Hank McGregor is the world champ, and Lance Kime is also up there, so I needed to improve my paddling. I’m happy with how things are going. I am getting there.”

Khwela said he had been keen to take on the Safire-Clanfin Nite Race as it was one final opportunity to paddle competitively in 2014. “It was the last chance to race for a while because I’m only going to race again on 17 and 18 January in the Highveld Croc, which is organised by my sponsor Euro Steel,” he explained.

Derek Holdsworth of short-term insurance broker Clanfin, a 27-Dusi veteran, was delighted to be giving back to the sport as a sponsor and said it still delivers thrills for him, even after all these years.

“I think it is the adventure, things like taking on rapids. In mountain bike racing, for example, I generally don’t get nervous but, without a shadow of a doubt, every time I get into a river, whether it’s the Dusi or the Umkomaas, I always have that nervous tingle. It’s adrenaline and excitement. There is nothing like paddling down a full river.”

Safire Insurance enjoyed a large turnout of staff, and Marketing Manager Anton Rohrs felt it reflected the nature of the company. “It’s very good to see all the staff getting involved. That’s what it is all about.”

Natal Canoe Club General Manager Brett Austen Smith said sponsors of the nature of those involved in the Safire-Clanfin Nite Race were hugely important. “I’m really, really in awe of them. They have been fantastic. They have been great supporters of the sport. They have done the Dusi themselves, and it is people like that that you can’t thank enough. They’re the backbone of the sport at the moment. With the competition we have from other sports, we need these kinds of sponsors.”