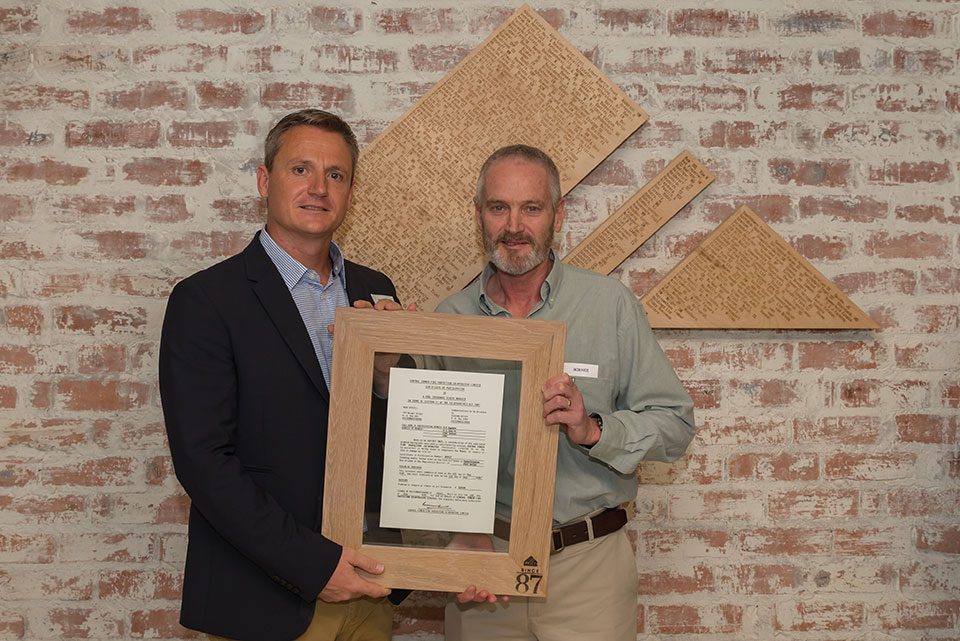 Safire recently celebrated its 30th anniversary by inviting its founder members to an awards event at Safire House in Pietermaritzburg. Safire Insurance, then known as the Central Timber Fire Protection Co-operative Limited, came into being on
1 May 1987 as an innovative insurance co-operative, created by timber-growers who wanted to control their spiralling insurance costs. Today, we are proud to be a leading short-term insurer with specialist niche products.

Pierre Bekker (left) with Jacob Kotze and the first Certificate issued by CTFP, Certificate No. 870001 and issued to Central Timber Co-operative Limited for the farm Morgezon in the Melmoth district, which is now owned by NCT.

“With the idea and with reinsurance backing secured, the Co-operative was formed and the three timber-growing co-operatives at the time – NCT, TWK and LK – put up guarantees to back the Co-operative pool. The founding directors were Bailey Bekker, Doug Crowe, Peter Lorenz, Stuart McMurray, Dave Dobson, David Earl and Reg Niebuhr, who were elected together with Michael Daly who was appointed as the general manager. Then, on 1 May 1987, with a total staff complement of three, 296 timber-growers received their certificates of participation in a pool insurance scheme contemplated in terms of section 51 of the Co-operatives Act.”
– Pierre Bekker, Safire CEO

Ruth Bezuidenhout from Safire’s Crop Division (far left), with founder member Pat Hutton representing Mbona Estates and Reg Niebuhr a founder member. Ruth has been with Safire for 25 years and also received an award for her long service to the company.

Congratulations on your 30th! We wish you many more years of success
– Mark and Caryn Crookes

“Not only have all the milestones and the growth we have achieved contributed to broadening our objectives and seen us playing a far larger role in the wider economy and society, we have also expanded our responsibilities towards many more stakeholders. We are proud to have met and in fact far exceeded the original expectations and objectives of our founding fathers, which was ‘to provide cost effective insurance for timber-growers’ plantations’…”
– Pierre Bekker, Safire CEO

Also present at the function were from left to right – Karen Henderson, Phillip Meyer, Claire and Volley Keyser with both the Meyer and Keyser families being founder members.

Thanks for the invite to celebrate 30 years, the Company and all responsible need to be congratulated for this achievement
– Gavin and Helen Chandler

“Today we have found solutions for many more timber-growers as we have three separate pools that house homogenous risk so that we can service a broader market without any cross-subsidisation. We can also provide structured solutions for the larger corporates provided the commitment to good risk management is there.”
– Pierre Bekker, Safire CEO

To commemorate significant members of Safire’s legacy who have passed away, on the same night the Safire meeting rooms were named after company founders Bailey Bekker, Peter Lorenz, Stuart McMurray and David Earl.

We as an industry value the role that Safire has played over the past 30 years and wish the company all best wishes for the future.
– Roger and Heather Godsmark