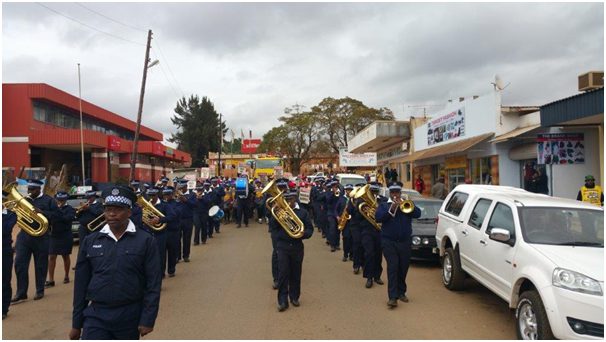 On Thursday, 7 July 2016, the community of Shiselweni braved cold temperatures to convey a message: Prevent Wild Fires. The fire awareness day has become an annual event in Nhlangano (Swaziland) and is driven by local government, the local forestry companies, business and the local community. The day started with a march through the streets of Nhlangano. Each of the 15 schools that was present had prepared a banner with its own message of the dangers of fires, either veld fires, forest fires or fires at their homes. The march was accompanied by the Royal Swaziland Brass Band (seen here) which brought a festive atmosphere to proceedings.

Speeches by the Regional Administrator (RA) Themba Masuku, Anton Roberts (Chairman of Shiselweni Farmers Association), representatives of the local chiefs, the Regional Commissioner of Police, the head of the fire department and other dignitaries highlighted the potential impact of fires on lives, livelihoods, communities, and the impact they have on the local economy. Employers such as forestry companies are the backbone of Shiselweni and should be protected as they are the main employer and source of revenue for the local community. Since inception of the fire awareness day 3 years ago, there has been a dramatic decrease in veld and forest fires reported in the Shiselweni area.

This annual awareness day is the culmination of continuous hard work that is done in schools and in the community to create general fire awareness which includes safety measures while burning grazing, and the dangers of honey hunting, smoking and the disposal of hot ash used for cooking and warming fires. Schools and community chiefs have been very effective mediums for communicating these messages to a large audience.

Special mention must go to the Regional Administrator Themba Masuku, Pieter Keeve and Bob Tumber from Shiselweni Forestry Company, Montigny Investments as well as the other local forestry companies and businesses for making this day such a success. It is a privilege for Safire to be part of this annual fire awareness day.